The Past Year...The Fall, The Flood and A New Baby.

We've had an adventure of a lifetime this past year. We've had a flood, a fall and in the midst of all that, our beautiful little Kara was born. They say that character is born out of trials and that God uses times like these to grow and beautify your relationship with Him. For that I am thankful....thankful that something good can and does come out of ugliness....thankful that God does care about my relationship with Him enough to give me times like these...and thankful that He gave us what we needed through people, prayer and His grace to get through it.

Thanksgiving day 2005, was a cold and windy day. After all our festivities were done for the day, we sent the kids up to bed. A little bit later, Grace came down the stairs stating the fact that the toilet was broken upstairs. I went up to check on what all the fuss was about finding out that their was no water in the toilet and the shower was not working. I promptly yelled down to Bob for help. Between the two of us, the only answer to our quandary was that the pipes had frozen.

Usually I feel for those people who have to work on a holiday at the Meijer's down the street, but for once, I was very thankful they were there and open for business on this particular holiday. We purchased a space heater which Bob stayed up all night checki 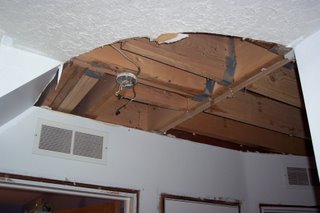 ng on so a fire didn't start. He finally pulled the plug early the following morning since it was getting too hot and didn't seem to be doing any good. He decided to lay down since he was very, very tired. Not soon after that, our early riser, Grace came frantically running in our room to inform us that there was water everywhere! And there was!

We had turned the shower on a trickle just in case the pipes thawed not thinking that the floor drain was frozen also. The inlet pipe had thawed out but the drain had not. Where does water go when the drain is frozen.....everywhere but there! As I went down stairs to get supplies to start cleaning it up...Ha!....I found that it was seeping through the ceiling in the hallway and kitchen. I realized at that moment....there would be no cleaning up....it had reached bigger proportions than any mop could fix. Our next step was to call the catastrophe team in!

A little over a week later, we had planned on going with our church to Holiday nights at Greenfield Village. We were all packed up and ready to go...we just needed to get the tickets from the table located inside our church. It was a beautiful night...crysta 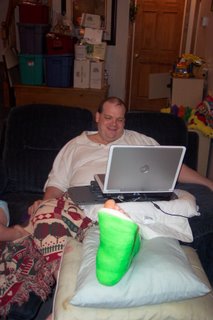 l clear with a light dusting of snow starting to fall. As Bob was coming back to the car, I saw him fall. Usually, one can get right back up but he seemed to be having a hard time getting in the upright position. My oldest son, Brad, wanted to go help him but I told him Dad had it under control and just to wait....he'd be fine.

When he finally made it back to the car, his face was as white as the snow that was falling. I thought to myself...that must of hurt! Bob said that his ankle hurt but he would just try to wait a few minutes and then we could go. He tried to stand up on it and almost lost his balance again. I realized then, even though he said we could just go and he would wait in the car while we had fun, that our fun would have to be had in the emergency waiting room. Being pregnancy and very emotional from the ordeal we had previously and were still experiencing, informed the kids with tears running down my cheeks, that we would not be going to Greenfield Village.

Over the next month and a half, a horrible doctor and so much pain, we decided that we needed to see a specialist. Upon his observation, he thought that Bob needed surgery. He had torn the main ligament in his ankle and needed surgery to anchor those back in place. His surgery date was set for April 5th. As I was sitting in the waiting room while Bob was having surgery, having contractions and praying this baby would not come early, I prayed that Bob would heal quickly. 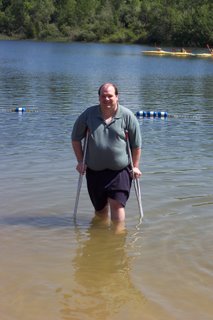 I've never experienced a spouse being in so much pain before. I physically felt ill. The after effects of the surgery were awful. I could hear him in the other room, just praying...please, God, help me...help me....I believe that the pain was so awful that is all that he could pray...over and over again. At that moment, I thought I wasn't going to make it through. I was so overwhelmed with watching him, my pregnancy, trying to maintain life for the kids. The only place to go was on my knees and pray for strength that only God can give. As I was praying one day, I felt a flutter of peace enter into my soul. I cannot explain it....it was ever so soft but yet so strong. I knew then, at that moment, God was reassuring me of His love, His hope....we were going to make it through!

I was having contractions off and on from January. Not your usual prelabor contractions, but strong, reminding me how awful labor can be, labor pains. By April, the doctor was watching closely....he said the baby could come anytime. I wasn't due till mid May. Every night, I'd wake from contractions. It became my usual routine. Early on the morning of May 2nd, I began those contractions, I thought to myself...I'll just go lay on the couch an 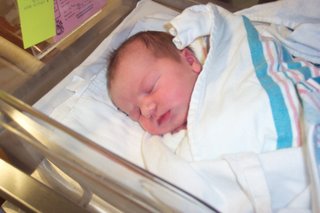 d wait till they stop. Bob wanted to know if he should call the doctor. I said to him...No, I'm not having this baby tonight. You are still on pain medication and in pain. It's just not time yet. I laid down on the couch and my water broke. I promptly got up and said...perhaps, I am having this baby!

Four and a half hours later, I told the nurse the baby was coming. She checked me and made notes in her chart....obviously not in a hurry. She indicated to me that we had a little bit yet to go. But she would go get the doctor. By the time the doctor and the nurse came back, the baby was laying in the bed using her very healthy lungs to tell everyone she had arrived. The doctor walked in, scratched his head and replied oh, ok....the nurse was in shock. She said that has never happened to her in the 25 years she had worked there. Maybe someone should listen to the patient.....A Mom knows!

It is now August, Kara has arrived, the surgery has come and gone, and my home is finally finished being repaired. God is good! We did make it and now can see God's fingerprints all over our lives...where he held us up and where he carried us. He truly is our sustainer.
Posted by Peanut Butter Kisses at 11:02 AM

Hey There,
Nice blog and what a year it has been for you guys. The camper and the suburban look cool...but how does it all fit in your yard and garage? :-)

Hey-
The camper must be stored at my mother-in-law's between times and during the winter. The suburban and the van do not fit simultaneously in the garage. We'll have to work that out before winter :-)

Hi Heather!
I cried when I read this one, about Bob's pain and how you were suffering. I'm so glad you looked to God through it all, and now, Bob is almost better, isn't he> Thank God for his willingness to work at it. Thank God he's not still praying constantly "Please God, help me..."