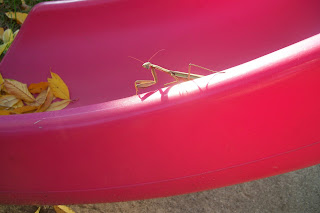 Those of you who know me, know that I have a huge bug aversion. I just don't do well with those creepy things. I realize that God has a reason for them and they can be a benefit to our environment BUT should they get into my house, all rules are irrelevant. My shoe is now greeting them intimately with all the love I can muster up unless of course, I can get a kid to save me and then it's their shoe.

Yesterday was a beautiful warm Fall day. The kids and I were outside enjoying it when I heard squealing along with Mom, come quick! You got to see this! I walked over to them without realizing what I was walking up to. What I found just resting so relaxed on our slide was this HUGE Praying Mantis. I've not seen one that big before. It totally creeped me out! I had the goosebumps the size of Texas and the sense of urgency to R-U-N.

I was instructed to get the camera which I did since it was a great excuse for me to get the heck out of there. As I was taking a few shots from different angles because the kids were just not satisfied with a photo from far distances, I noticed that creepy bug was staring at me. What was up with that? I, then, realized him and I were having a stare-down. Have you ever done that before? Well....Mr. P.M. won, he moved and I jumped, letting my eye's drop from his. I wasn't taking any chances of him jumping on me because I think that I would have lost consciousness.

Now we move forward to today....another wonderful warm Fall day. The kids were headed out into the backyard to blow bubbles and play in the sandbox when I heard the familiar squeals before they even got outside. I went to check out all the excitement and found myself walking, once again, into my strict no bug rule boundary line being tossed to the wind. There hanging onto the brick of the back of my house was that Praying Mantis who refuses to evict himself from my backyard. Only this time, he decided to tantalize me by hanging out just outside the door so no one could go outside without him flinging himself inside.

I looked at that irritatingly huge bug and realized that he was again looking right at me. What is it with this bug? Was there a notice sent out to the local bug population that I was their supreme target? Seriously, I'm not amused. I even walked away and came back and there he was...staring at me. I wonder what he was thinking? If it was me, I'd tell myself that this backyard was NOT where I wanted to be considering the crazy kids that run around and could unknowingly squish me and then there is that bug hating Mother who lives in that house and is NOT afraid to use the can of bug extinguishing spray.....all of it, if need be...on one bug.

The kids caught it and removed it from my sight. Of course, not without bringing it into the house to show me. I yelled...'you know, Christmas is coming and it is NOT in your best interest to creep me out with that bug' but I don't think anyone heard me. All I got was laughter. That bug better not show up tomorrow....I heard there is a chance for snow. Muhahaha! We'll just see how he handles that because I am NOT inviting him in and making him hot cocoa.
Posted by Peanut Butter Kisses at 6:00 PM