A Temptation Too Great...

This past week, we had some beautiful weather. It sure seems like a waste to just stay inside. So I got rather ambitious and loaded all six kids up in our van and headed on over to the park. It was my first adventure with all six of those cute little people...well, some of them are not so little anymore but taller than me.

The thing about kids is that they come with stuff like one wanted his scooter, one needed a stroller, one wanted her precious animals (the stuffed kind), and this goes on and on depending on the particular moment and the particular child. Let's not forget the diaper bag, the camera, drinks because you just need a drink when you are at the park. By the time, you load everyone up and all this stuff, you feel like you need a trailer to hitch onto the back of the car. It really truly is an adventure just getting to the car.

So we get to the park and everyone bolts out of the car much to my frazzlement (yes, I know that is not a word...it is one in my own personal dictionary though). Trying to keep them all together and not let them run around in the parking lot or disappear into the park before I know where they were was my first encounter at the park that day. Actually, at that point, I truly had had enough fun for the day and we could have just packed the van back up and headed home. I would have been satisfied that we did something...together.However, that would have caused much distress to some of my kids since they had their little hearts set on exploring the world at the park.

So my next brilliant idea was to go check out the fountain at the back of this park before we got settled by the slide. We've been here once before but I never got past the playground. I heard the fountain area was very nice and wanted to see it for myself. 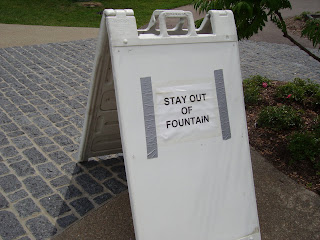 Let me tell you...I should have known that whether it be a mud puddle or a beautiful fountain filled with water..it calls to my children. It doesn't matter that the sign says 'stay out of the fountain'. The temptation is just to great and before I knew what hit me...I had three kids playing in the water drenching themselves from head to toe. Do you think that in all the stuff I brought, that there was anything to dry off with. Of course not! 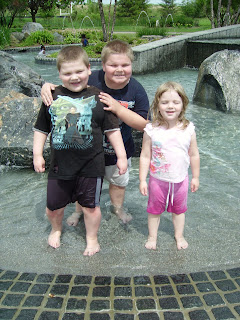 All and all they had fun splashing around in the water and Ryan was pleased as punch that the 'park people' didn't yell at him to get out. Perhaps, I looked like a frazzled mother and they felt sympathy for me or perhaps, they saw all the kids who were also as tempted as mine on such a warm day and decided not to say anything. I personally probably should have made them get out but they were having so much fun and I was glad for something to entertain them besides me. I do think that making a park and placing the fountain so close to the playground where the temptation is greater than the strength children possess is just too much to resist. I mean, really, who planned that one??? 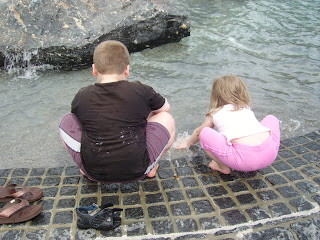 Needless to say, we never made it to the slide or the swings. The younger ones now refer to that park as the 'water park' and cannot wait to go back. Should I send a note to the 'park people' to drain the fountain before we come or should we just let it be is the question of the day. I think Liliana had the right idea. It was a great day to take a nap! If only she knew what fun she missed... 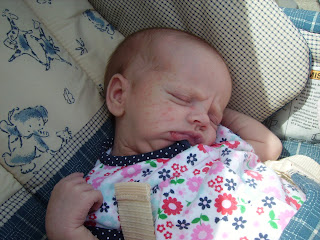 Posted by Peanut Butter Kisses at 9:47 AM

Ditto-so very true! Your best post yet :D And yes, frazzlement should be a real word!