A Glimpse of A Dying Childhood....

Two of my bouncy boys desperately needed haircuts. I had been procrastinating for quite some time till the point you began to wonder if they were relatives of 'Cousin It'. I don't know if this has happened to anyone else but it seems like once they get their hair cut, they age. They just look and even act a little bit older. I must admit this makes my heart cringe.

I feel that with every little piece of hair that hits the floor, a piece of their beautiful childhood is cut off with it. Now I am not advocating that you never get your haircut. I am a strong believer in our son's being clean cut but I am also a believer in preserving their childhood, thus, the procrastinating is the result.

My husband got sick and tired of watching our three year old rub his eyes because the hair was poking him and of course, the shaggy look was not all that appealing either. On Saturday, he announced to me that he was taking him to get his haircut. Of course, our five year old didn't want to be left out and announced that he wanted one too.

After picking our oldest son up from his sleepover, we drove to the hair cutting place for this to occur. I sat in the car with our other children while Bob took them in. He said when it was their turn, the hair stylist asked our five year old how he wanted his hair cut. As Bob was telling me this, I thought to myself...he's not going to care. But his answer shocked the heck out of me. I don't know where it came from, when he even thought about it but he had it all figured out..it was just hidden behind those curiously sparkling eyes of his. His reply was an emphatic "I want spiky hair!"

After I picked my jaw up off the floor, I looked back at him. And there before my very eyes was a spiky haired, smiling from ear to ear little five year old who indeed had aged since he went into the store. As I silently began crying inside, I looked over at my three year old who was yelling, "look at me...look at me!" Yep, I silently sobbed as I once again was faced with another aging child who was also smiling ear to ear....there goes their childhood!

Next thing you know....they will be looking down at me from their 6 foot tall height patting me on the head. (Shiver me timbers!) 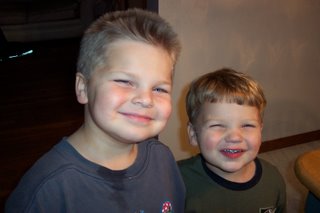 They are so cute! Ryan looks like he is the proudest little dumpling. :-)

They DO grow when their hair is cut. It's not fair!

They are soo cute Heather! Especially love Ryan's hair!! And don't worry, they won't be six feet tall anytime soon. You have alot of childhood to continue to relish. Besides, if they do, you can always have some more. :0)